Single father gets a big promotion! 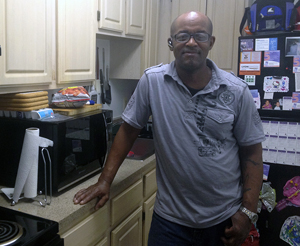 Have you ever cooked steak in the microwave? Matthew Davis hadn’t either. But when the food service professional moved into the City's DC General Family Shelter last year, he missed his kitchen, so he got creative. “I’d make eggs for my daughter in the common microwave,” he said. “Once, I even cooked steaks in there!”

With 20 years of experience as a cook, Mr. Davis did not expect to end up unemployed or living in a shelter. A single father of a 10-year-old girl, the two of them moved to Washington, DC to be closer to supportive family. But his job search proved to be unexpectedly difficult, and when he exhausted his family’s hospitality, he had nowhere to go.

From DC General, Mr. Davis was placed into Community of Hope’s Rapid Re-Housing program, which helped him and his daughter move into an apartment of their own, and provided a case manager and employment specialist who made sure he could continue his job search. Mr. Davis had a strong food service resume – in fact, he was denied a position at a popular fast-food chain because he was over-qualified – but he lacked the personal connections that are so often needed to get an interview in any industry.

That’s why our employment team works to make connections on our clients’ behalf. Employment specialist Sheldon Good had built a relationship with Willie’s Brew & Que in DC’s Navy Yard neighborhood, and recommended Mr. Davis for an open position there. Mr. Davis was hired as a cook, happy to once again be doing the work he loves. Best of all, after a few months of part-time work as a line cook, he received a promotion to full-time kitchen manager.

"Mr. Davis is completely qualified to be a kitchen manager and to be successful in the restaurant industry in DC,” says his employment specialist, Sheldon Good. “He put in the hard work; I’m just grateful for the opportunity to help him get a foot in the door."

Mr. Davis finished his time in Rapid Re-Housing in January. He continues to live in his apartment, now paying his rent without assistance. He is confident that he will keep his daughter housed in their own place – with a kitchen of their own. “That’s important for us,” he said. “Because I’m teaching her to cook, too.”