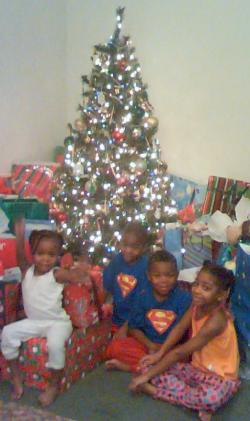 We recently talked with Ebony Roscoe on her job almost a year after she and her family were featured in a news story on DC’s Fox 5 TV channel. Ms. Roscoe moved into her own home through Community of Hope’s Homelessness Prevention and Rapid Re-housing Program (HPRP) in July 2010 after living for almost a year at Community of Hope’s Hope Apartments. She is employed by a private mental health services contractor as a Community Transition Agent and administrative assistant.

Ms. Roscoe didn’t consider herself homeless when she re-located to DC in 2008. She and her four children moved in with her brother. She decided to apply for social service assistance while she tried to establish herself. It was during that process she was told to declare herself homeless, since she fit DC’s definition of homelessness. “I tell people you never know what someone’s story is until you listen to them. Some of the women I talk to [in my discussion group] tell me, ‘I wouldn’t have known you were homeless.’ That’s because I didn’t look it to them.”

Eventually she moved into the Salvation Army’s Turning Points program, where she and her children lived for 9 months. In June 2009, she and her family moved to Hope Apartments.

What was it like to be featured in a TV news story?
“It was incredible! I was so happy! People donated a lot of stuff to my kids. There were email responses, monetary contributions. The kids were invited to a few Christmas parties. They enjoyed it so much! They had never had something like that before. They got so many toys, that I asked them to each give 2 away. Well, without my asking, they decided to give away 5 toys each.”

Ms. Roscoe made an important employment contact as a result of the outpouring of support. “My boss had responded to the story, and sent toys. She had asked me for my resume, saying she would see what she could do to help me find a job. As it turned out, she ended up offering me a position with the company she and her husband run. The day my interview was scheduled was during that big snowstorm [in December 2009]. So I ended up interviewing over the phone.”

She was offered the position, which she started in January. “When she [my boss] first mentioned the pay, I remember thinking that, while it was low, it was a good chance for me to get re-established in the work place. But it turned out to be close to what I was making in my last full-time position. I was so happy, I was beyond ecstatic. It was what I wanted. My goal to get back to where I was previously was close.”

“The biggest thing that helped me was my persistence.  A lot! As the time went on at Hope, I began to feel complacent. But after a while, I realized I wanted to be on my own, in my own home. In May 2010 I decided to be out of Hope by July 1st. My kids were going away for the first time, to visit relatives for 6 weeks. So my goal was to get approved for a new home before they left. It gave them something to look forward to when they got back. Shortly after I moved into my apartment, I began having discussion groups for women called A.L.I.V.E, which is an acronym for Always Living Internal Versus External.”

“Some folks told me the amount of time was too short. But I did it.” On July 15 the Roscoe family was in their new home. “It’s great! We have 3 bedrooms and 2 bathrooms. So I have my own, and the kids have theirs.”

What’s next for the family?
“I want to be a little more established in my house – we still need to get some more furniture for the kids’ bedrooms, for me. And I would like to get my business going, based on this group of women I lead through discussions on Thursdays.  Always staying as positive as possible and continuing to move forward is what I strive to remember as the days continue.”

“It’s been a blessing for me. I’m really happy.”