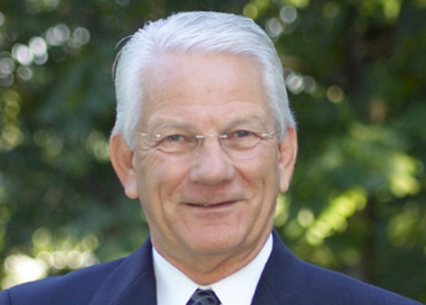 By Kelly Sweeney McShane, President and CEO, Community of Hope

I write today with the sad news that Rev. Tom Nees, a dear friend, mentor, and, most importantly, the visionary behind Community of Hope, passed away on January 24, 2021.  In the twenty years that I have led the organization that he founded, I have enjoyed countless conversations with this gentle, wise, and bold leader.  I have learned from him and with him.  He has modeled graceful leadership at every point and I, countless staff, board members, volunteers, and the Washington, DC community have been shaped by his influence and decades of service.

In the early 1970’s, Rev. Tom Nees, then in his 30s, was pastor serving what was then First Church of the Nazarene in northwest Washington, DC. He walked the streets of his neighborhood and yearned for a new way to do ministry.  Tom studied theologians, read the news, wrote papers, and talked to neighbors and DC councilmembers.  Just blocks from his home, not five years before, the 1968 race riots following the assassination of another pastor and leader, Dr. Martin Luther King, Jr. had destroyed sections of the city.

Tom imagined a new world where his church members and his neighbors worshipped together and directly impacted the loss and poverty around them.  He held visionary conversations with close friends including Bob Sloan, later president of Sibley Memorial Hospital; John Lunsford, an attorney in private practice; Wallace Bailey, a pioneer in national electronic communications; Dick Schubert, then president of the American Red Cross; Rodwell Buckley, pastor of Faith Mission

In 1980, Community of Hope, Inc was founded with Tom serving as Executive Director. The work began in an abandoned building at 1417 Belmont St., NW. The Church of the Nazarene purchased this building for $75,000. Tom was bold enough in his vision to meet with then Washington Mayor Walter Washington who saw enough promise in what he called this "ragtag group of do-gooders" that he provided a $100,000 demonstration grant. With that money and thousands of hours of volunteer labor the group renovated the building and created 19 apartments for the Community of Hope to use as an emergency shelter, legal aid, education, job training/assistance, clothing and health care. At the time, the concept of providing all of the services that a family going through homelessness might need in one centralized location was unique and became the foundation of success for the Community of Hope.

The fact that Tom has passed away in the year we are celebrating our 40th anniversary is particularly poignant.  Last September as we launched our 40th anniversary celebration, Tom wrote a powerful reflection on our name and his vision. That reflection was the last of  his thoughtful writings that we published, but our archives are full of newsletters thoughtfully crafted by Tom as he grappled with statistics  of infant mortality, homelessness, and poverty.  He wrote and spoke honestly about racism and its deep effects on the futures for the people he and his team were serving.

Tom wasn’t just a deep thinker, he was a relator. He built long-term relationships with families in the neighborhood and those helped by the organization.  Past newsletters are full of “resurrection stories” from people who talk about what Community of Hope’s help meant to them. Stories that continue on to this day. Tom built a true ‘Community of Hope’ for its families.

In his time founding and leading Community of Hope, Tom built leaders through his example of exceptional service.  There are so many staff and board leaders from those early years that are still involved today and many who spread their learnings and his ethos into their next organizations and teams. And they all share stories of how Tom took them by the hand and, through his passion and determination, led them to leadership within Community of Hope.

After Community of Hope, Tom went on to raise leaders and build infrastructure with the Church of the Nazarene to ensure that the model of compassionate ministry centers within the denomination could be replicated and flourish across the nation.  After serving the denomination for many years, he founded Leading to Serve, Inc, a fellowship program to strengthen progressive leadership models across a variety of sectors.

Throughout the years, Tom has always supported Community of Hope and me personally – whether it was sharing the history of Community of Hope at a staff retreat (with all the trials and tribulations of the early days), bringing friends to learn about what is happening on the ground in DC, or celebrating our successes. Because of his exceptional leadership example, in 2015 Community of Hope created the Tom Nees Award for Exceptional Service. This award recognizes its recipient for their long-standing, deeply-impacting service to the women, men, and children who turn to Community of Hope for help.

Every year (except in 2020), I stood with   Tom to share the awards with our exceptional leaders.  He marveled at the growth and changes of the organization he founded, which moved from one building in one neighborhood to nine buildings across the  city. I marveled – and will continue – to do   so at the vision he cast and the heart he  embedded in our organizational DNA.  Thanks to the seed that he planted and nourished, Community of Hope has grown to serve about 15,000 people in 2020 alone, and over 100,000 people in its history.  Tom was truly a good and faithful servant and will be much missed.

The vision and legacy of Rev. Tom Nees lives on today in the services and successes of the Community of Hope.