Prevent homelessness? Break the cycle of poverty? It’s not just his dream but his job. 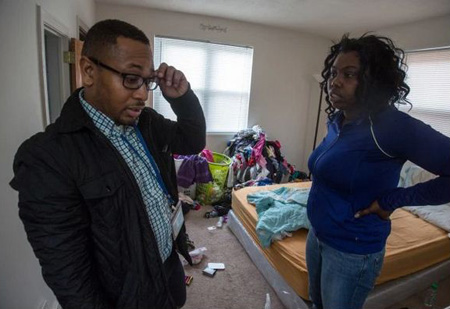 Sometimes, he just hopes they’ll open the door. But the prospect seemed unlikely on this cloudy morning as Lamar Smith, 36, approached the brick walk-up. The lights were off, the blinds closed; no sign of anyone in this Southeast Washington home.

“I called this morning, and she said she was waiting for me,” he said.

It was the beginning of the holiday season, and Smith had stuffed his blue Hyundai with Swiffer mops, detergent, floor polish. The items would make life easier for his clients, formerly homeless families who needed to keep their homes tidy to continue receiving their housing vouchers. His job was to make sure they never became homeless again.

As a housing stability case manager with the city-contracted nonprofit Community of Hope, Smith connects clients with job-skills programs if they had no jobs. He’ll go over budgets if they have trouble budgeting. He’ll help them until they need no help at all from him or the government; a crisis fixer for Washington’s poorest — if they open the door.

He knocked. No answer.

Fifty years after President Lyndon B. Johnson declared war on poverty, politicians and pundits still debate: Is our social-service system working, or are the poor working the social- service system?

Facing a stubborn poverty rate and a surge of homeless families, policy advocates and city officials in the District tussled over the answer throughout the administration of Vincent C. Gray (D). When the advocates called for more help for families, the city suggested doing less.

Families were too dependent on government and needed to be weaned, officials had concluded. The biggest push came in October, when officials slashed welfare (now known as Temporary Assistance for Needy Families, or TANF) by 41 percent, hoping to inspire self-sufficiency and break cycles of poverty.

Poor families were on the most wobbly financial footing in generations, and the city began relying heavily on case managers such as Smith to set them on a more stable path. The city allocated $600,000 last year to hire 10 more case managers to coach homeless families at the old D.C. General Hospital through the city’s temporary voucher program, known as rapid rehousing.

And the city agreed to add $2.3 million to give more help to the city’s most vulnerable families: Smith’s clientele.

Still, those broader goals seemed to fade away while dealing with the distinct, everyday challenges of families trying to get by. Was Smith helping too much? Not enough?

“I have big dreams for my clients,” Smith said. “But I can only push them as far as they want to go.”

Before they met Smith, they had hit rock bottom. They lost their jobs and their homes. Some succumbed to depression, drugs or alcohol. Their lives were in such disarray that they became one of the 400 families in the District that receive a permanent supportive housing voucher. There are no time limits for the subsidy as long as they are getting substance abuse treatment or counseling, looking for jobs to raise their income, keeping the place clean.

But with welfare benefits dwindling over the past year, there is more financial pressure on Smith’s families to make ends meet and, thus, more urgency to his mission.

Instability once led to Smith’s clients falling into homelessness or abuse. If he can’t keep them on the right path, they face that possibility again.

Smith tries to abide by the adage, “Don’t work harder than your client.” He laughs with them but never hugs them. He rarely scolds but makes pointed suggestions to improve their lives — even if it takes years for them to get it.

And it is taking years. Since Smith was assigned 11 families nearly five years ago, only one of them progressed so much that it no longer needs his help. That married couple raised their income and began renting on the market, no strings attached.

But Timika Holiday, 29, wasn’t even answering when Smith knocked on her door. He was making his way to another home when she called back. She apologized for falling asleep.

“How’s your work situation going?” he asked her when he returned to her house.

Holiday explained that she might be able to get a job in the District, but she needed to appear in court far away to clear an old assault charge.

“Mr. Smith, I need you to send me to Colorado!” she said, her eyes flitting back repeatedly to a talk show on TV.

She had found the job on her own. But asking his agency to pay for a bus trip to Colorado so she could interview seemed extreme. And would she even be offered the job? Did she need more help or less?

“I’d suggest you keep on working to find another job, just in case this one doesn’t work out,” Smith said. It was his polite way of letting her know she was asking too much. She said little after that.

She turned to him.

Sometimes, clients will tell him to get lost. Sometimes, it seems as though systems that are supposed to help don’t help.

“Sometimes, they just don’t believe they can [be self-sufficient], so it’s easy for them to get discouraged,” Smith said. “You see them making these steps, and then they’ll have a small setback and we’ll have to start over again.”

He tries to remain calm when he’s in front of the families, always put-together with a close-cropped haircut, fitted pants and colorful socks, but he’ll exhale his annoyance with other case managers at the office. He crisscrosses Washington listening to gospel music to stay resolute. And he takes comfort in the small successes.

“My families have been through a lot, and they’re still trying,” Smith said. “One of my clients just saw her child graduate from high school. No one in her family had ever done that before. That’s success.”

Her name is Paula Gray, a 49-year-old mother of nine, ages 12 to 30. She had grown up in an abusive home and dropped out in the 11th grade after becoming addicted to drugs.

“Anything that could get me high,” Gray said. “I did everything but shootin’. ”

She found help through the city’s shelter system and sobered up. She met Smith when she got a subsidy for her home off Good Hope Road about five years ago, which is when she immediately started to avoid him.

“He wanted to sign me up for programs, but I was done with programs,” Gray recalled. “But he kept coming. Mr. Smith became the only person who I could talk to about anything, and he wouldn’t judge me.”

She feared working full time because she wanted to make sure her children wouldn’t repeat her mistakes. Plus, who would hire a former addict with no high school diploma? She had taken some security guard classes a while back, but her license had expired.

“You have to be the role model for your family,” Smith recalled telling her. “If you’re working, it will inspire everyone else to start working.”

Lately, things weren’t going so well. Gray had been going to a job-training class but stopped. Her high school graduate had no job and wasn’t in college. Smith wanted to know what was going on, but his calls were just going to voice mail.

He drove to her house, off Good Hope Road, and knocked on her door.

“It’s good to see you, Mr. Smith!” Paula Gray said as she invited him in.

The home buzzed. Her six youngest and three grandchildren stayed with her. She kept lights off to cut costs. Her wooden floor was barren because she was saving to get a rug. She wrapped Christmas lights around a small, plastic houseplant and an old Bible opened to the 62nd Psalm on her side table. The two sat down on a love seat.

“Of course,” she responded.

Smith grew skeptical. “Ms. Gray, you have to fill me in.”

Everything was not good. Leroy, her 12-year-old, had been in the hospital, and she was too consumed to answer her phone.

Her monthly welfare check had been reduced from $425 to $151, which could hardly cover the water bill. She had been denied emergency energy assistance. She had to wait until her power was cut off.

More reductions were coming, which might be slowed if she went back to the job-skills class. But there was no money to pay for a bus to get there. The city was supposed to provide her a transportation subsidy but, somehow, it had not yet been processed. She had been waiting for it all month.

The lack of transportation money meant no attendance at job training. Not attending job training would mean even more reductions in welfare benefits, which would strain her budget even more. It seemed like one big spiral.

“That’s not right,” Smith said. “You’re trying. They should be helping.”

“I just get so frustrated sometimes,” Gray told him. “As soon as I try to do what I need to do, something always comes up to, like, stagnate me. It’s not that I don’t want to go. No, I want to go. I need the training — I need all of that.”

Paris, 18, walked down the stairs in a T-shirt and basketball shorts. He was the fourth of Gray’s nine children, the first in their family to graduate.

“So, what’s going on? You graduated, and then what happened?” Smith questioned. “You’re too smart to be sitting around.”

“I’m not sitting around,” Paris said. “I’m waiting for a phone call for a job.”

“Okay, we need to check in with you,” Smith told Paris. “Do you check e-mail? You can’t live like this.”

Smith returned his attention to the mother. From a large binder, he pulled out a budget work sheet.

The household’s income: $151 in welfare money from Gray, combined with the $494 her 24-year-old daughter contributes from her welfare check.

“You really got that number down,” Smith acknowledged. “I remember when it was $500.”

“I know! I locked up the laundry room.”

She laughed when he asked about clothing. “A clothing budget? I don’t even know what that is.”

Then, toiletries. And cable. And cellphones. And haircuts. By the time they calculated all the expenses, Gray ended up with about $35 left.

“And we’re probably missing some things,” Smith said. “I’m going to see if we can help you pay off [the water] this month, but it seems like the only thing left to suggest is to find a way to raise your income. How do you think you can do that?”

Gray could come up with only one answer: “I need a job.”

Smith vowed to do as much as he could to find independent living programs for her adult children so they could ease the burden in the house. He believed that she was working hard; she just needed more help.

“Oh, one more thing,” Smith said. “We had some extra funds, so I have a gift card from Target for you.”

She lifted her arms and smiled. She could finally buy the rug.

“Thank you, Mr. Smith!” Gray said. “I know you’re always doing your best for me.”

As he left, Gray thought about the ways she could do her best for him, for her children, for herself.

She decided she’d scrounge up some money to grab a bus and head across town, so she could finally renew her security license. Two days later, she woke up in the predawn dark. She slipped on a white T-shirt, hooped earrings and a black jacket and walked to the bus stop.

It was 6:30 a.m. The center didn’t open for another two hours, but she wanted to make sure she was first in line when the doors finally opened.

This article originally appeared in The Washington Post on January 17, 2015.