One Father’s Pursuit of Hope 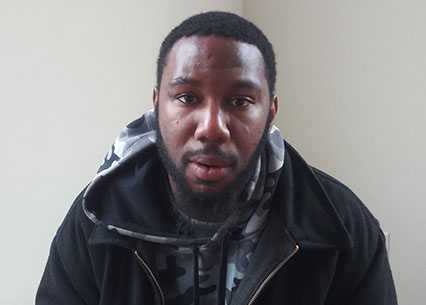 Franklin Turner received the best holiday gift last year – a new home. Franklin, a DC native and loving father of two, was greeted with a Welcome Home note when he moved into his new one-bedroom apartment at Archer Park. It was a day that he didn’t initially think would happen but was thankful to finally experience. “I was grateful when I moved into my apartment. God knew everything I had been through. I couldn’t believe it.”

Franklin became homeless with his wife and two kids after their home was foreclosed. After connecting with the Virginia Williams Family Resource Center, the family was temporarily placed in a motel and then housed in a shelter. “Even though we were in that situation, I was happy that we were all still together as a family.” Being homeless as a young married couple with kids brought stress and strife between the couple, sadly causing a separation between the family. Franklin’s situation worsened as he found himself removed from the shelter and his family. Coping with the loss of his family, he ended up living on the streets for a year before being connected to the housing program at Community of Hope. Things were looking bright for Franklin but just as Community of Hope received approval for his housing, he was arrested for minor traffic violations and old unpaid tickets. During his short jail term, Community of Hope case managers continued to keep the line of communication with him open and worked diligently so Franklin would have stable housing once released. On December 25, 2018, Franklin was free to head to his new home. “My kids were happy when they saw my new place. I don’t want my kids to ever have to go through being homeless again.”

Now that Franklin has stable housing, he sets short- and long-term goals so that he can be the best person for himself and best provider for his children. “Knowing my kids can come over to my place gives me peace. I can have them sleep here with me knowing they are safe.” So, with the support from his Community of Hope case manager, Franklin is working to find a job, become financially secure, and buy a car so he can take his children to enjoy the many Washington attractions this summer. “I’m looking forward to being even more active in my children’s lives now that I have a place to live and a place for them to come.”

Franklin’s prospects seemed hopeless but his courage and determination turned his and his children’s lives around. Franklin is definitely making every effort to utilize all of his support and resources to change himself for the better and provide hope for his family. “Having my own apartment feels wonderful. I’m at a loss for words and I don’t know even know how to express how I feel. When I was homeless, I always thought about how it would be to have my own [place]. Now I do and it’s wonderful. Thank you, Community of Hope.”