A Mother’s Longing for a Home 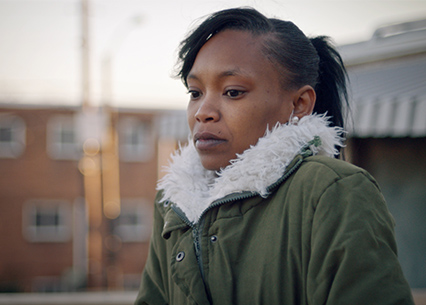 DaLanda Gorman, DC resident, and mother of six had an emotional moment when her family first moved into a homeless shelter. “When I became homeless, I asked myself – How did I end up here?”

DaLanda says she doesn’t remember much of her childhood because she was a teen mom and always had great responsibility at an early age. So when her family ended up in the shelter, she not only blamed herself but felt hurt and shame because previously she had passed judgment on others in similar circumstances – until she became homeless herself. “I know now, being homeless doesn’t look like what I’ve always thought it was.”

Often worried about her children’s safety and future in the shelter, DaLanda spent a lot of time reflecting on ways to get her family out of the situation they were in. Her family lived in another shelter for a little over a year until they were connected to our Girard Street Apartments. “Community of Hope gave us a place to stay, and the support me and my family needed.”

Once her family’s environment changed and they were in safe temporary housing, DaLanda was able to shift her priorities and focus on finding an apartment of their own. “I knew that I had to help my case managers so they could help me. No one wants to do the footwork. Case managers have more than one person they are working with, so you have to do the work.” And that is exactly what DaLanda did. After 90 days in temporary housing, her family moved into a 5-bedroom house with the short term rental assistance through Rapid Re-Housing. “We now live in a house which I can say is mine.” Now that the Gorman family has their own home, DaLanda focuses on going back to school and encouraging her growing children. “I want them [my kids] to know they can do whatever they want to do and I hope they grow up and be whatever they want to be. They need to know that if I can do it, they can do it.”

Dalanda is clearly a fabulous mother, driven by her love for her children to provide for her family even in challenging circumstances. “Motherhood is beautiful. It’s all about learning - learning about yourself and your children. Motherhood has made me who I am.”

You can watch more about DaLanda’s story here!