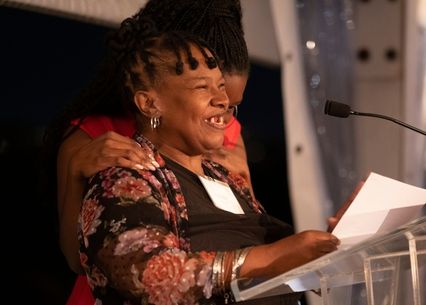 Youth who experience trauma, including abuse or neglect, are at increased risk for long-term emotional, behavioral, and physical health problems, among other challenges. Sherry Williams, a mother and survivor, knows trauma all too well – but despite growing up in foster care, experiencing homelessness, managing addiction, and overcoming physical, mental, and emotional abuse from a young age, Sherry stands tall today as a woman rebuilt on hope.

Growing up, Sherry’s mother had a substance use disorder, which forced Sherry and her siblings to grow up in group homes and foster care. As the youngest child in her family, Sherry’s sense of purpose faltered as her sisters and brothers started to age out of their foster homes. At seventeen, the years of neglect became too much, and Sherry began using drugs and later became pregnant with her first child. Not long after giving birth, Sherry found herself in and out of jail. “It took a while; I went to jail 5 to 6 times … before I realized I was worth something,” says Sherry.

In 1988, Sherry found herself picking up the pieces of her life and searching for help – that’s when she first met Community of Hope. Laura Worby, then a nurse practitioner on our health team, began making home visits to provide whole-person care to Sherry and her children—one of the most empowering chapters of her life. “I couldn’t even go to the dentist because of so many sexual assaults; I couldn’t have them work on my mouth because I have been through so much,” says Sherry. “Laura and Community of Hope taught me so much. After finding Community of Hope, my life began to change and is still changing.”

Sherry came a long way from the childhood that left her traumatized, but her journey of restoration was not over. In 2011, due to unfortunate circumstances, Sherry and her 5 kids lost their housing, but Community of Hope was able to provide permanent supportive housing. “Permanent supportive housing supported me with everything I needed,” says Sherry. “Community of Hope has helped me, and my children grow. Two of my children are now in hair academy.” 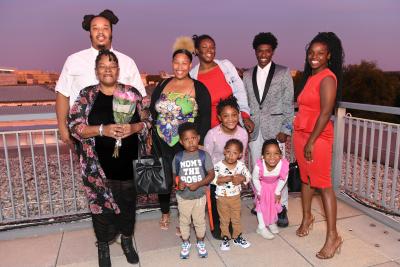 Today, Sherry is completing her education to become an addiction counselor and doing better than ever. Her gratitude for the support she has received from Community of Hope has motivated her to pay it forward. “I want to become an addiction counselor because I want to help someone, someone who has been through what I’ve been through. I want to give back, and now I believe I can do that,” says Sherry. “I want the people who helped me to know they saved my life and my children’s lives. I am grateful.”