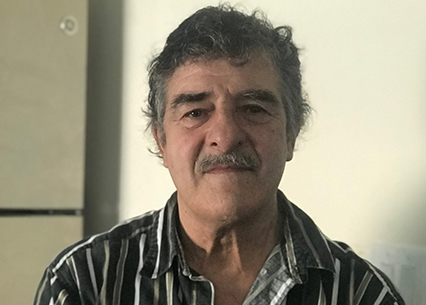 Joseph Morgan, a DC native, is still in disbelief that he finally has his own apartment after being homeless for over 10 years. “I didn’t think it was reality. I thought, something is going to happen and I won’t get the apartment. And then reality set in when they gave me the key.”

Joseph spent much of his early life living with his family in the District and shared strong childhood memories of his time in Catholic school. He boxed as a sport and had his most pivotal childhood memory when he met Muhammad Ali. As we talked about these significant moments, he relived parts of his life that he hadn’t thought about in years. And even still with his time of reminiscing – Joseph still couldn’t believe how far he had come in his journey and how just eight months prior – he was homeless, wondering where he’d sleep that night. “I stayed in [hospital emergency department waiting rooms] a lot, with friends, and in parking lots when people didn’t drive by and tell me to leave.”

Joseph became homeless after falling behind in paying his rent. He experienced a substance abuse issue after using pain medications to address a sports injury. “It worked for the pain but destroyed 20 years of my life.” Things only continued to spiral for Joseph when he was arrested for several outstanding tickets that dated back 10 years. He spent one year incarcerated and knew the moment he was released that he wanted his life to change for the better. Joseph entered a re-entry program upon his release and accessed resources and support to maintain stability and find success in the community after incarceration. From there, he was connected to Community of Hope because a stable home is the ideal environment for positive outcomes to continue. He was placed at Archer Park Apartments – newly built in Southeast DC.

Now, after being stably housed for a few months, Joseph has already made significant improvements in his life. Along with maintaining his sobriety, he is taking care of his health and eating well-balanced meals that he didn’t have access to while living on the streets. “It’s amazing how I neglected myself when I was homeless – my health in particular. I wasn’t eating properly. Now, I’m eating, getting rest, and I’m making healthy shakes.” With his health now headed in the right direction, Joseph is making goals to get a job and get his finances in order. “When you don’t have a place to live, it’s hard finding work. Now that I do have a place to live I don’t think there is any excuse not to be able to have an income.” Joseph admits that when he was homeless, he was miserable all the time – but now that he has a home, his moods have improved dramatically. “I’m always in a good mood now and I’m doing well. If it weren’t for Community of Hope all of this wouldn’t have happened. I feel better and I have self-confidence knowing that things are going to be okay.”