Generations of a Mother's Love 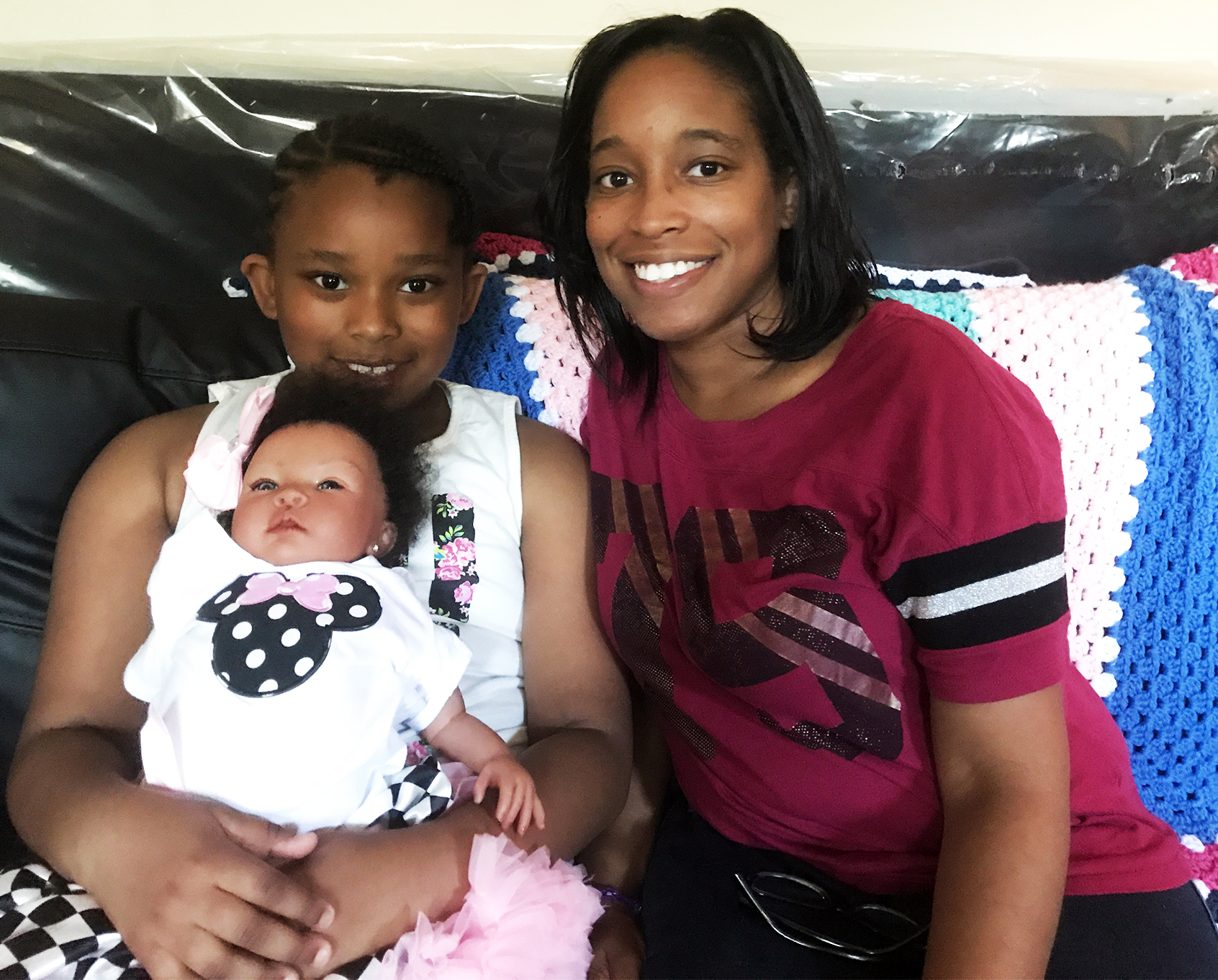 It had been 6 weeks since Ms. Jones moved in. The living room was quaint and cute, but not quite lived in. There were a few half-opened boxes that lined the walls; she’d made plans to fully unpack. The drapes were hung beautifully. “I hung them myself,” she said proudly. “I don’t really like asking for help. That’s why you see all those boxes here.”

“It’s still surreal. I didn’t think this would happen,” Ms. Jones said of her new home. “After everything I been through, Community of Hope helped me a lot.”

As she showed me around her 2 bedroom home, I was greeted by her 9-year-old daughter Alaysia—a smart young girl with a personality as bright as her smile. Alaysia loves dolls. Her favorite is a life-like baby doll purchased by her grandmother, which she swaddled with one hand as she shook mine with the other. “Those dolls are so expensive. I don’t why my mom buys them, but Alaysia loves them,” said Ms. Jones. Proudly, Alaysia showed off her prized doll—a brown girl, like her, with a head full of curly hair, fine wrinkles on the hands and feet, and a cute button nose.

On the coffee table next to empty picture frames were handmade Mother’s Day cards. Ms. Jones spent Mother’s Day with the four generations of the women in her life. Alaysia, Ms. Jones, her mother, and grandmother went to lunch, an hour away in Fredericksburg, VA. It’s half way between DC and Culpepper, VA, where her grandmother lives and her last stable home.

Ms. Jones is the baby girl of 6 children. “My biological mother was still living life when she had me and just didn’t have time to raise me. A family friend took me in. When you hear me say, my mom, I’m talking about the woman that raised me,” she said firmly.

When her informally-adopted mother moved to D.C. in 2011, Ms. Jones followed, with a young Alaysia in tow and dreams of living and thriving in the nation’s capital. She bought a car, rented an apartment, and worked in IT for companies in the suburbs. Car troubles escalated her 45-minute car commute to several hours on public transportation, leading to less consistent attendance at work. She later lost her job and fell behind on rent.

A string of “bad luck and bad decisions,” as she puts it, made her job search difficult. Ms. Jones found herself out of a home and crashing at a friend’s place. Over the course of two months, she visited Virginia Williams Resource Center four times, desperately in search of housing. They found a place for her—DC General Shelter, where she stayed for about 45 days. Alaysia, uncomfortable with the conditions at the shelter, stayed with her grandma, while she attended school.

A stroke of better luck would land Ms. Jones and Alaysia a place at Community of Hope’s Hope Apartments, where she built a strong relationship with her case managers. “I know I give them a headache,” she jokes. “I would call them all the time.” Our team, Ms. Bekki and Ms. Carla, helped Ms. Jones enter an IT program, in which she received her certification. With her new credentials, Ms. Jones confidently resumed her job search. She was also able to attend classes to aide her emotional wellness and receive help searching for more stable housing.

While things were moving in a promising direction for Ms. Jones, the transitions took a toll on her young daughter. Alaysia’s progress in school began to decline, and her teacher suggested mental health counseling. Disappointed with the school’s dismissive response, Ms. Jones removed Alaysia from the school and searched for a better one.

She applied for the Opportunity Scholarship Program and was granted $8,500 a year for a private school of her choice. Ms. Jones chose a parochial school in Upper Northwest, Washington, DC—a 45-minute commute from their apartment in Southeast. “I’m not very religious, but I think it’s the best place for Alaysia,” Ms. Jones says of the Catholic school. “I want her to know life like the people in Northwest. I want her to have that experience like the kids there.”

Alaysia’s well-being and performance have increased dramatically, but the downside to her attending private school is the cost and the commute. While the OSP scholarship covers a great deal, Ms. Jones is still responsible for paying the remaining $1,500 of the $10,000 tuition. Coupled with a long commute against traffic, the cost of her daughter’s new school admittedly wears on her a bit. “I have to factor in looking for a job and getting Alaysia to and from school on time; she is so happy and doing well.”

Now, securely in her new home—thanks to a rapid rehousing program—Ms. Jones feels a bit relieved. She keeps in contact the Community of Hope team and updates them on her new life. She continues her job search daily, and still makes time to bond with Alaysia, who has built a great social life at school. “Alaysia is much more outgoing and confident than I am. I want her to be proud of who she is and know that she can be anything she wants to be.”

As they packed to go to grandma’s house, Ms. Jones and Alaysia posed for a photo inside their new home. Right before the flash, the bright-eyed 9-year-old, gripping her baby doll said, “wait, let me change her outfit!”