Crossing the Ocean to Keep Her Baby Safe 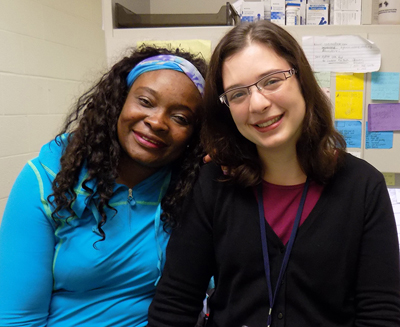 Imagine the joy of welcoming a child into the world, only to be told soon after by family and friends that your baby is a demon. That is what happened to Mireille when her six-month-old began developing differently than most children in her home country of Gabon.

First, he had trouble lifting his head. Months later, he started having seizures and struggled to sit up. Mireille’s family sent the two of them to a traditional healer in the jungle. When his condition did not improve, she was encouraged to kill her child. A determined mother, Mireille started looking for ways to seek more effective treatment – and safety – for her son.

Mireille and her son – now five years old – are medical refugees in the United States. A doctor in Boston diagnosed her son’s condition as cerebral palsy; he hears and understands people around him, but has little control over his movement or speech. Relieved to have some answers, she made her way to Washington, DC to be closer to family. When she arrived in DC, she and her son came to our Marie Reed Health Center for refugee health screenings, and she’s been coming back for care ever since.

“Everything that I’ve done for my son here has been thanks to the team supporting me at Marie Reed,” she says. An enrollment assister helped her sign up for proper health insurance, allowing her son to get physical therapy at no cost. French-speaking staff translates for Mireille in her appointments. The care coordination team makes sure that her son has all the resources available to him, like a well-fitting wheelchair and transportation to school and physical therapy. She even has a home health aide for her son.

Mireille insists that Marie Reed has given her cause for hope. He is growing and shows more signs of focus than he used to. For a child with cerebral palsy, this is progress. And for a mother who was rejected by her community because of her son’s health, the welcome that they both get at Marie Reed is a relief.

“Marie Reed is helping my son become a great child,” says Mireille.“I believe special things will happen for him.  It’s been a blessing to end up at Community of Hope.”

[Note: Mireille is pictured here with Marie Reed's Patient Navigator and French translator, Arielle Ganem-Rosen. Her son is not pictured to protect the family's privacy.]