Our accomplishments would not be possible without the unwavering commitment, expertise, and guidance of our Board of Directors and staff.

More than half of our dedicated board members are active patients in our health centers. All of our leadership team has served at Community of Hope for more than four years, and several for more than ten years. 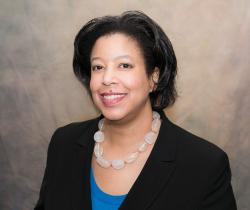 Kimberly Woods is committed to making Washington, DC more equitable.  As her city grows and the demographics evolve, she wants to see that every person regardless of income has access to healthcare and housing.

As Public Relations Manager at Amtrak based in the District, Kimberly serves as the company spokesperson.  She is no stranger to strategic executive communications, from distilling the most important messages in a crisis to leading special events.   Communications has been the focus of her academic and professional life for 15 years.  She received her Bachelor of Arts in Journalism at Norfolk State University where she was on staff at the campus newspaper, starting as a staff writer and ending college as the Editor-in-Chief. She worked as a reporter and editor for newspapers in Tennessee, New Jersey, and Virginia.  Prior to moving to the District, Kimberly was a communications specialist at State Farm Insurance in Bloomington, IL.

Kimberly became involved with Community of Hope as a patient in our health center and joined the board in 2016 after serving as a volunteer on the Resource Development Advisory Committee.  On the board she has served as Vice Chair; Chair of the Resource Development Committee; Chair of Board Development Committee; and now Chair of the board.  She has advised and guided as the board developed its 2020-2014 Strategic Plan, remodeled and re-opened the Marie Reed Health Center, and opened The Triumph and The Commons at Stanton Square and in the plans to expand and relocate the Family Health and Birth Center. All of these projects fuel her interest in Community of Hope’s mission.

Kimberly has lived in the District since 2013 after growing up mostly in Virginia Beach, VA and living in several different parts of the country as the proud daughter of a US Navy member. In her spare time, Kimberly is an avid tennis fan and is always eager to talk about her favorite players and matches.  She experiments in the kitchen with new recipes and explores the District’s museums and neighborhoods. 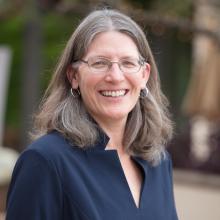 Kelly Sweeney McShane is a well-respected and innovative nonprofit leader in Washington, DC. For over 30 years, she has worked tirelessly to improve the lives of homeless and low-income families in Washington, DC through providing direct services as well as finding long-term solutions through system change. Her bold leadership in housing systems and healthcare delivery is transforming care in both fields.

Kelly has been President and CEO of Community of Hope (COH) since 2001. Her leadership and foresight have grown COH from a budget of $1.8 million to $32 million, allowing the organization to annually serve the needs of about 16,000 people. Founded in 1980, COH's mission is to improve health and end family homelessness to make Washington, DC more equitable. Kelly has led the organization through four strategic plans and multiple capital projects.

Kelly has provided leadership at a city level in transforming systems to help low-income families. Since 2006, Kelly has served as a member of the Mayor’s Interagency Council on Homelessness, including co-chairing the Strategic Planning Committee. She currently serves as the Chair of the Board of Directors of the DC Primary Care Association and as a member of the Federal City Council.  She has previously served as a board member of 501cTech, Franciscan Mission Service, the Center for Non-profit Advancement, and as an advisory committee member of the DC Bar Pro Bono Center. She is a member of the 2006 class of Leadership Greater Washington. She received a Master’s in Business Administration from Georgetown University and has a Bachelor’s degree from Harvard University.

Kelly has won numerous awards, including the Eugene and Agnes E. Meyer Foundation's Exponent Award, in 2009, Washington Women of Excellence Award in 2015, and the Washington Business Journal's Women Who Mean Business Award in 2017.

Kelly previously served as Executive Director of Hannah House, a transitional housing program for homeless women in the District of Columbia, and was a Peace Corps Volunteer in Sierra Leone, West Africa. She lives in Washington, DC with her husband Kevin McShane, and they are parents to three adult children.

Alsan joined the Community of Hope in May 2021. He has been serving in Health Care Leadership since 2005. He previously served as the Medical Director of the Children’s Health Center at THEARC and prior to that he served as the Health Services Administrator for DC Department of Youth Rehabilitation Services. As Chief Medical Officer, he oversees the effective management of Community of Hope’s three community health centers and is responsible for managing clinical operations, liaising between the administration and medical staff, and ensuring that patients receive the highest standard of medical care. As a pediatrician, he also sees patients at our Conway Health and Resource Center.

Alsan completed his Pediatrics Residency at the Children’s National Medical Center. He is Board Certified in General Pediatrics and received his MD from Louisiana State University School of Medicine, and MBA in Medical Services Management from John Hopkins’ Carey School of Business.

Since 2009, Jamey has served as our Vice President Housing Programs and Policy. He leads our approach to ending homelessness and is key to implementing our housing programs. He previously worked at the National Alliance to End Homelessness where he researched, wrote and edited key policy/planning papers, briefs and technical assistance toolkits. Topics included creating a plan for homelessness prevention and rapid re-housing, developing key partnerships, and implementing strategies to foster system change to move toward a housing stability focus. This work allowed him to be involved with some of the most innovative and results-oriented work going on in the country.

Jamey received his Master’s in Social Work from the University of Connecticut and a Bachelor’s from Wheaton College. He currently serves on several committees of the DC Interagency Council on Homelessness.

Leah joined the team as the Vice President, Development and Communications in 2011. Prior to working at COH, she volunteered for more than two years on COH’s Finance committee and briefly on the Board of Directors. In her current role, she oversees the fundraising, communications, community engagement, volunteerism and marketing operations. Leah brings with her years of experience in fundraising and communications, serving previously as the Director of Individual Giving at Sojourners and at other nonprofits, including a center for abused and neglected children, a retirement home, and a community health center.

Leah received her Master’s degree in Nonprofit Management from Eastern University and her Bachelor’s from Olivet Nazarene University.

Stephanie received her Bachelor’s from the University of Minnesota Carlson School of Management and her Master’s in Educational Policy and Social Analysis from Columbia University. She is a member of the Society for Human Resource Management.

Victoria joined the Community of Hope in 2007. She has more than 30 years of experience in the nonprofit field in both management and direct service positions. As Vice President of Health Services, she oversees the operations of the dental, behavioral health and patient engagement departments of Community of Hope health services. She has helped successfully lead us through the development and opening of the Conway Health and Resource Center, our newest and largest health center in Ward 8, and the merger with the Family Health and Birth Center. She has also served DC in a variety of positions including Program Director during the development of N Street Village and the Director of Client Services at Community Council for the Homeless at Friendship Place. Victoria is currently the chair of the board of directors for DC’s Clinically Integrated Network.

Victoria received her Bachelor’s from St. Olaf College and has completed a fellowship with the Advisory Board Company.

David joined the Community of Hope in October 2021. He has more than 10 years of experience as a cultural broker and community-based researcher in Washington, DC, and the San Francisco Bay Area. As VP of Community Impact and Evaluation, David oversees and directs place-based engagement initiatives in Ward 8 and provides strategic support in the ongoing evaluation of programming at COH. His research has focused on the integration of harm reduction into health and human services.

David received his Bachelor's from California State University East Bay and his Master's in Health Administration from George Washington University.

Derek Sykes joined Community of Hope in 2019. As Vice President of Finance and Operations, he leads the Accounting, Billing, Facilities, Finance, Information Technology, and Special Projects teams. Derek began his career at KPMG as an auditor and forensic accountant and has served in various roles within healthcare, including the Director of Finance at Inova Alexandria Hospital. He also serves as the Treasurer on the Board of Directors for Little Lights Urban Ministries.

Derek received his Bachelors of Science in Business Administration and Masters of Accountancy from the Kenan-Flagler Business School at the University North Carolina at Chapel Hill.